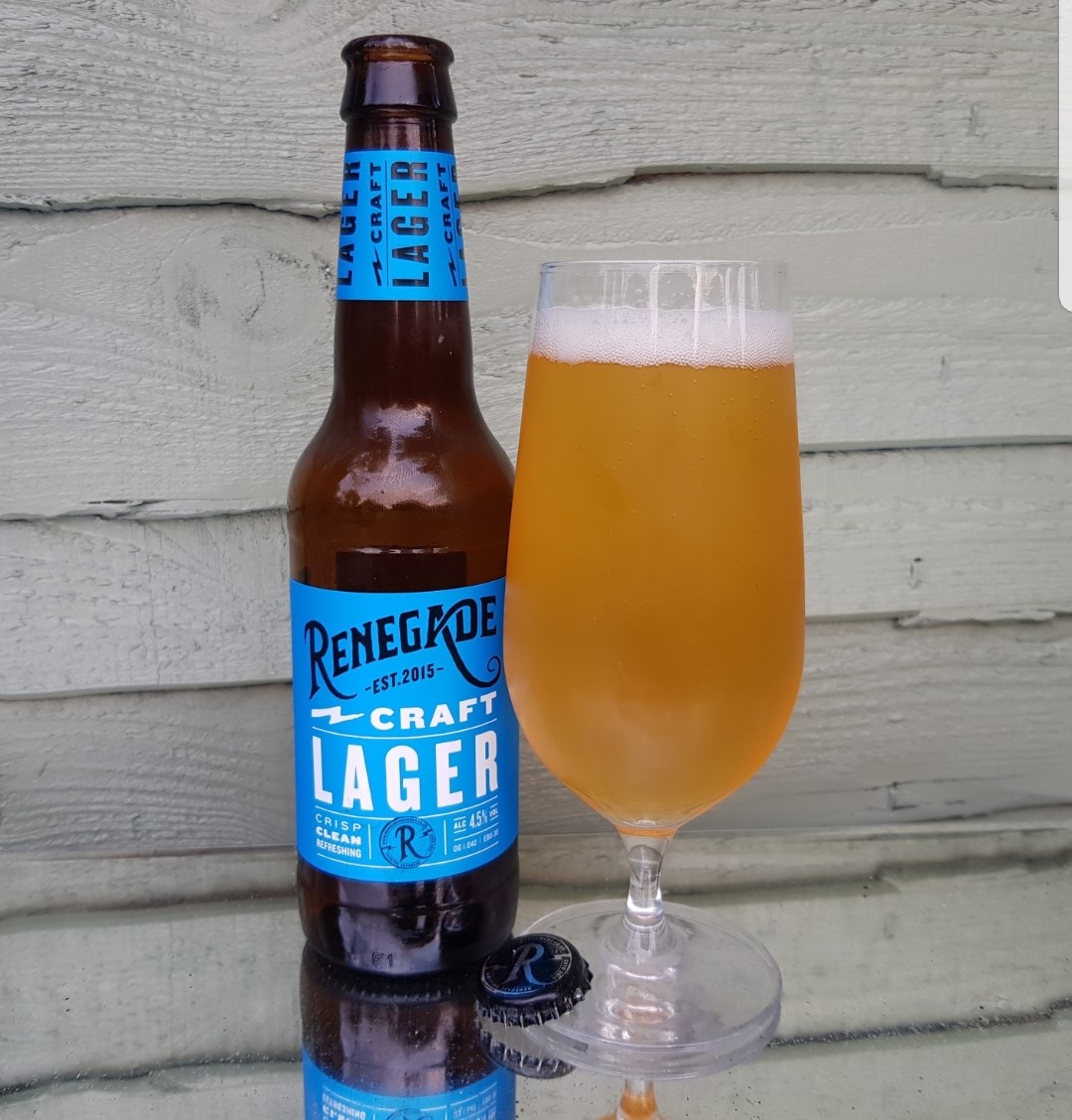 The day was Tuesday..

The weather was fine..

The sun was baking..

AND my lovely, lovely wife volunteered herself to go and get the bin lids from school. This was it. This was the time to crack an ice cold crisp Lager and take five in the garden.

However……the only Lager I had on chill was Renegade. Now as far as unappealing looking bottles of beer go, this has to be up there. What is with the Flash Gordon / Harry Potteresqe zigzag on the label??  I’m all for a bit of retro here n there but this just looks rubbish. The only real positive from the packaging was the blue label contrasting off the brown bottle. Don’t get me wrong, due to the situation I was still very much looking forward to cracking a cold one but to have ANY negative thoughts has to tell a story.

So I set my deckchair up, tied a hanky on my head, prepared a glass and got to work…

Now seeing as there was a hint a negativity in the air I was pleased as to how RCL poured, looked and smelled. Things were without doubt looking up, as was I, as the aforementioned deckchair was now fully reclined.

So in the tranquillity of a roasting summers day in the garden with the chorus of flies flying and my dog barking as my soundtrack I threw down that all important first sip. Ooooh, it was good… for three seconds. And then fell away to a bit of a classic crappy Lager undertone.

Jymi was confused so went in again.. same result.

So the first three seconds after sipping RCL has good citrus flavour that build’s in your cheeks and is pretty nice and refreshing to be fair, but once that’s gone it’s very much downhill with EVERYTHING!

Session wise this could work but only because you would want to replace the aftertaste with the lovely initial taste. And because of that you would probably fire down way too quickly so would fast become a non session beer.

Renegade Craft Lager is perfectly drinkable but is a sip of two halves. After being 2-0 up at half time, you end up losing 5-2… Gutted.

It’s hard to decide if the look of Renegade Lager is inspired or insipid.  But I am going to give it the benefit of the doubt and come down on the side of inspired, owing mainly to it’s purposeful retro look.  And there is a lot to get your brain around on the label too, which for a lager is unusual. It leads one to think that we could have a very decent beer here.  It’s most certainly a strong start for West Berkshire Brewery’s Renegade Craft Lager.

Into the glass and it has great colour, which is on the lighter side of amber, but with more depth than some lagers.  On the palate, there are most definitely light bitter notes and they are matched well to this lager.  They don’t hang around for long, but who wants them to when it’s a lager that’s in hand? The slight issue with Renegade is the bitter notes aren’t backed up by too much else, meaning that the overall impact is slightly underwhelming once one is deep into the bottle.

This is a well-tempered, pleasant lager.  It’s not a super hero of a beer, but it could most definitely play the starring role on a hot summer’s evening, if one were so inclined.