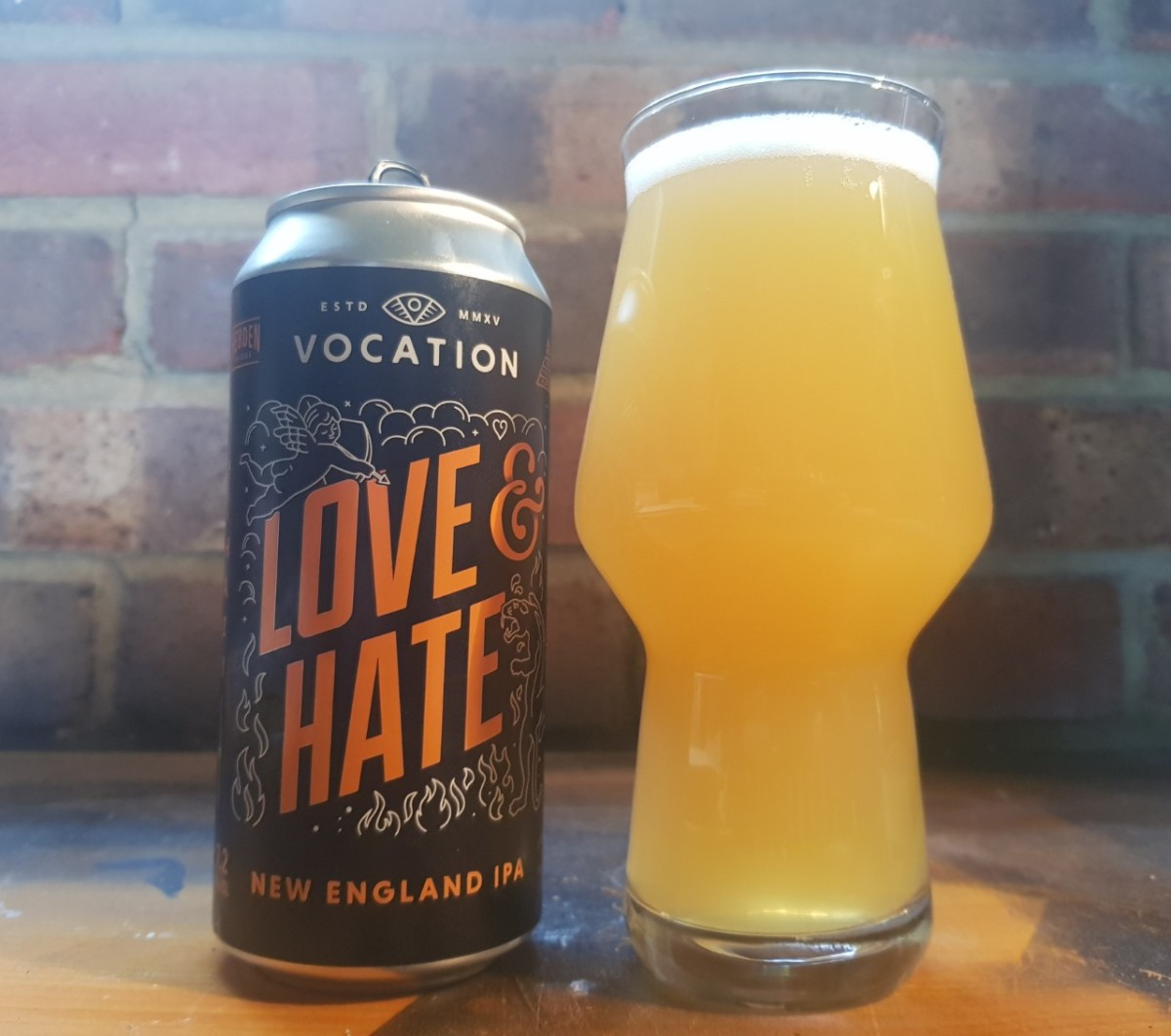 CHECK OUT THEIR FINAL WORK BY CLICKING HERE

Love and Hate looks like buttermilk in the glass. An odd way to start a review, I know. But it’s the first thing that strikes you about this New England IPA from Vocation. It’s got to be said, it looks very, very tempting indeed.

And it’s good. It’s just not great. The nose is cracking, full of the promised tropical aromas. But, when you start drinking, L & H fast becomes a bit like a relative that’s out stayed their welcome. You see, it makes all the right noises. It tries hard to be different. It tries hard to be a good guest. But it just falls a little short. It’s clunky in the drinking and claggy in the mouth.

It’s not that you don’t want L & H at your house. It’s not bad. It’s just there’s other relatives that you’d feel more at ease with.

L & H is likely to be the beer you overlook, but when you do have one, you won’t be too disappointed. You just might not go back to it for a little while.

When I was just a boy and living with me Ma n Pa I used to put a weekly order in for Um Bongo tropical juice drink. I’d like to think that I wasn’t sucked in to that advertising tune and just thought it was a dang good tropical juice but looking back… I think the tune got me.

Jaaaaaaaaaameeeees, is there anything you would like from the supermarket?

That lovely lady would return and I would settle down in front of the TV and enjoy that totally tropical taste. Wait, what?

But, that was a very long time ago and not much has changed, fundamentally. I have developed the ability to go shopping for myself (well done me) and I no longer drink Um Bongo, well so I thought…

See, I ventured to the supermarket the other day and picked up Love & Hate.  I had seen it there many times lurking on the shelf but had not seen it anywhere else. I suppose this makes it a supermarket beer? So I popped two in my basket (massive trolly) and proceeded to the checkout (dog and cat food aisle). It is so hard being this cool.

Now upon testing I couldn’t believe how close to my childhood this actually got. Supermarket bought and Um Bongo taste. This is not in any way a negative towards this beer. Its peach, its mango, its tropical, its great! And it fly’s down. However, unlike Um Bongo, it’s 7.2% !!!! F**k me. After a few minutes to calm myself and really take onboard what was happening it began to dawn on me that this was a decent beer. The sweetness coming from L&H nearing the end of the glass did become a touch too much for me if I’m honest but overall this is a fine NEIPA and reachable for the UK masses. The fact Vocation are still leaving me wanting regarding the branding of their range is just something I’m going have to learn to deal with.

CHECK OUT THE MOB SQUAD’S VIEWS ON LOVE & HATE HERE