For me, stout’s are the epitome of the winter ale. I love them. And I cannot wait to try a new one. It’s something I look forward to with immense anticipation. I can’t put into the words the disappointment then, when I come across a bad one. No matter how I try, or which way I look at it, I can’t find a place where Imperial Stout works for me.

The flavour is heavy up front with a very poor and shallow finish. There’s a rush of the hallowed land of coffee overtones and dark chocolate. But it’s short lived and soon disappears into the ether. And this does not make for a pleasant drinking experience.

It’s very rare that I mention the strength of a beer. ABV should not matter. It’s the taste that counts. But with Imperial Stouts, I can’t get away from the strength of it. It’s impossible to. 9% is not necessary. It’s not an indulgence any of us need.

There are many great stouts out there. This is not one of them. My advice to you is to steer clear of this. Go for something that’s a pleasure to drink, not a battle to chew down.

Sometimes a beer works its way into contention if there is a doubt of its quality early on. The first few sips sometimes can be a bit of a challenge as there are so many styles and variants of those styles out there nowadays. Sometimes it takes a while to understand a beer and let it settle down on your palate.

However, with this monster it was the other way around. I really loved this brew at first but the more involved I got the more the love began to subside. See, at first I almost imagined myself sat in a -35c Red Square talking to a man with a strong jaw and a lady with blond hair and a stern look whilst sipping my Imperial Stout. It felt right, it felt warming, and the strength of the thing numbed the pain of the cold. But as I quite slowly made my way though my drink it began to dawn on me that I was sat in a warm enough suburban English garage on my own. It also began to dawn on me that this drink was becoming sweeter and sweeter by the sip. By the time I had finished it was almost a relief. Don’t get me wrong, I did enjoy most if not all of this beer. It just switched into something that isn’t quite for me and certainly wouldn’t have me going back for another.

That said, next time it’s -35c West of London then I’ll deffo be off for an Impy S by Nøgne Ø. 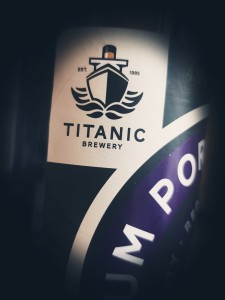