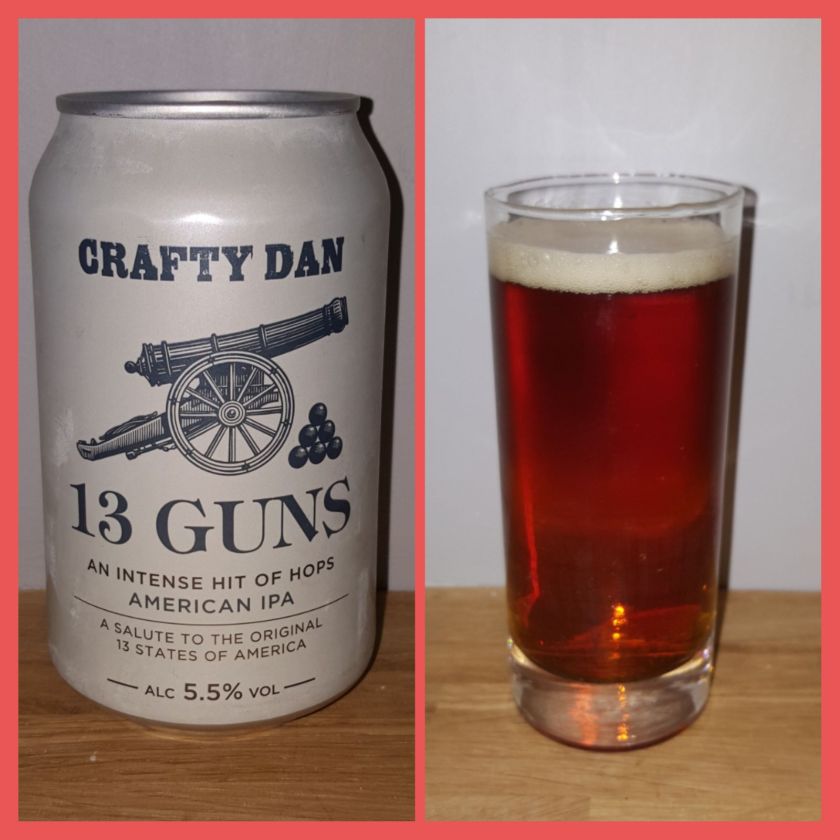 13 Guns doesn’t seem to promise too much from it’s packaging. It’s not quite enticing and intriguing enough and before embarking on its taste adventure you are left with a confusion of expectations.

On first pouring, you are met with some strong and pleasant pineapple aromas, which gives rise to raised expectations when compared with the slightly underwhelming packaging. Then the tasting…and expectations are slightly depressed again. The taste, although not wholly unpleasant, is lacking when compared with the nose of this beer. However, when not taken in direct comparison with one another, the taste is better than average and added to that, 13 Guns slips down nice and easy. To say you would be able to have a session on these beers is probably a stretch of the imagination.

13 Guns is a confused beer. While it is very drinkable, it probably won’t become a long-time favourite of many consumers. And this is, in part, down to its lack of consistency between all of its elements. The whole package doesn’t pull together as you might like, and there are others out there doing this significantly better. This leads to a lack of conviction in believing in this beer. With some tweaks and fine-tuning, you can’t help but imagine what 13 Guns could have been…or could yet still be…

Firstly, the look of her… For me, brilliant!! So understated, but absolutely catches the eye. It’s brave to go with no colour in today’s bright world, but I’m glad the design team over at Crafty Dan had the cannonballs to do it. Good job dudes, good job.

Now, the drink itself takes my mind off to the 1976 critically acclaimed novel by R. Hargreaves, Mr. Muddle, and specifically to the main character of this fantastic read… Mr. Muddle. To put it simply, Muddle is all over the shop, and I believe this beer is too.

Let’s break this down into the order of events..

Again, brilliant!! It smells fantastic. Kind of fruity, kind of Caribbean? I don’t know, but the nose is great.

Poor. Not for me at all…

Once that initial taste has worn off the flavour then builds to a lovely hoppy explosion with more Caribbean yet caramelly hints. A real treat.

Rubbish. It left me feeling like I hadn’t enjoyed it when in fact, I had!

I honestly don’t know what to make of this beer. I’ve given her the benefit of the doubt in the scoring but it’s left me confused and obviously, in a muddle.