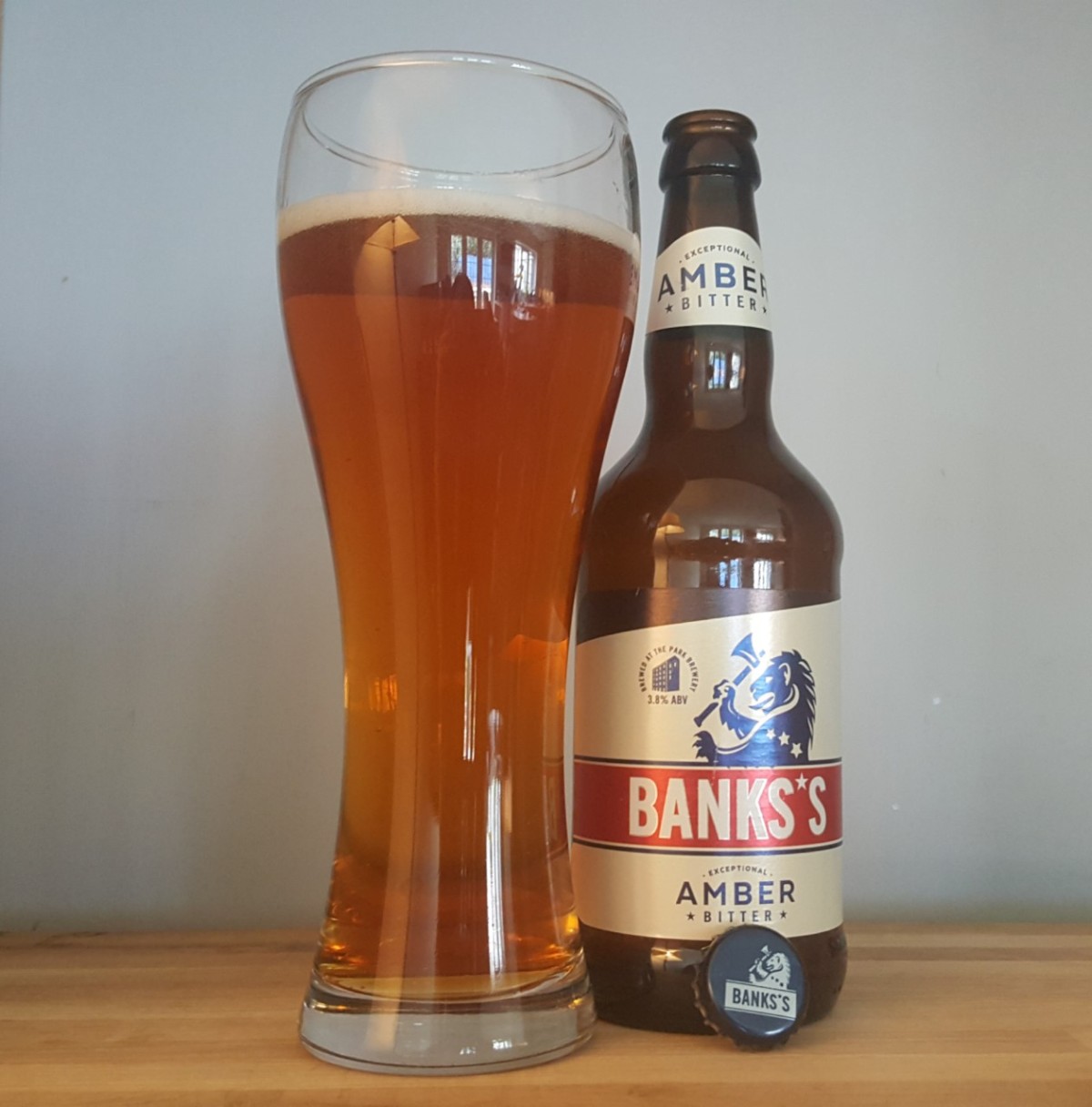 So I once knew a bloke called Ralph. Though we got on he wasn’t necessarily a friend as such. Now Ralph was well over 6ft tall and probably 7ft wide. He was covered tattoos (I can’t rule out one of them being a Lion wielding an axe), had military short hair and just looked like a right tough b*****d. But there was one thing in particular that really stuck with me about this man mountain. His handshake. I distinctly remember when I first met him and shook him by the mit. I remember almost bracing myself and thinking, “come on Jymi, you can handle this”. I hadn’t have worried. Because I had gone in the with strongest handshake I could muster and Ralph had the handshake of an empty marigold I pretty much crushed all the bones in his right hand to tiny little pieces. I have a feeling this is why we never made it to friends status.

This brings me seamlessly to Banks’s Amber Bitter. Great name by the way chaps, blimey!

The packaging, when it comes to the font, colours and artwork make’s this brew seem like a bit of a tough lad. So you might think what is going on inside the bottle may well follow suit. Well, you would be very wrong. The nose is weak and almost no existent, though not at all unpleasant if you do manage to pick up anything. The taste is thin, weak and a long way from exceptional but again not at all unpleasant. I genuinely think this would work well as a session beer due to the percentage and it actually tasting alright…

There isn’t much more to say really…. Bye!

What we have here is a very average British bitter.  I’m stating that right from the outset.

Banks’ nose is malty with a very, very subtle hint of citrus.  It is neither offensive nor is it especially pleasant.  I suppose it is fair to say, like everything else with this beer, it is very run of the mill.

The drinking is incredibly middle of the road (what a surprise) with malt and dried leaves as the main fore-flavours.  Bitterness plays a secondary role here, leading to Banks falling slap bang into the middle of the session ale category.  It has a slightly off texture, which leaves one with the feeling of having had beer flavoured mouthwash once swallowed.

You can’t help but feel that Banks belongs somewhere in the late seventies.

In my opinion, there is no other way to write a review of this beer, than to fill it full of idioms and clichés.  To be fair, the best way to describe Banks Bitter is to imagine a cliché in beer form, well then you will be close to Banks.

The slogan for this beer should be: Quite Quaffable!

MOB review next weekend: DANGEROUSLY CLOSE TO STUPID AMOUNT OF MANGO by TO ØL

WOULD YOU ADAM n EVE IT, IT’S MOB’S FIRST BIRTHDAY NEXT FRIDAY!!

YES INDEED, IT WAS ONE YEAR AGO THAT WE TOLD YOU OUR OPINION ON LANDLORD BY TIMOTHY TAYLOR’S. AND 52 REVIEWS ON WE’RE TASTING THAT CRAZY THING ABOVE! ↑↑↑

WILL BE POSTING A TOP 10 SO FAR MIDWEEK AND HOPEFULLY HAVE SOMETHING SUPER COOL LINED FOR YOU KATS BY FRIDAY!