Somewhere along the line whilst musing on booze I have written about how I normally go about scoring a beer name. It was as simple as how would it sound coming out if ordering at a pub/bar.

Pint of Dave says it will be fine please Dave = very bad.

However, my thoughts on this have evolved a little over the years. Though it will still boil down to ‘how it sounds’ I do now think more about how the name relates to the beer itself.

Now, with Precious Stones my initial thoughts were it was a fairly cool name though you may sound like a bit of a ‘nana ordering one. I then thought oooooooh, this is actually a really good name as Apricots have stones and so do… ah Blood Oranges don’t have stones. Now seeing as this is an Apricot & Blood Orange Sour I did have to conclude this wasn’t a great name for our beer.

Thankfully though this brew is decent and that at the end of the day is of course what really matters.

A medium level of sourness brings along with it definite notes of our mentioned fruits. Sounds obvious but this is not always the case!!! Precious Stones is very refreshing and VERY drinkable. In my note book I have written in capitals… FINISHED IN MINUTES! Tells a story. The aftertaste lingers and lingers too which is lovely. I personally think at a slightly higher ABV this brew could be an absolute rocker! But let’s just settle on it being very good.

Now, if you’re brewing a sour, blood orange has to be a good ingredient, does it not? So, with my love of sours, this is getting my juices flowing even before the crack of the can. Come on Precious Stones – you can deliver.

As an aside, I quite like the name. It’s a good angle.

The apricot and blood orange are, unsurprisingly, ever present. They’re there in abundance when you first drink. As you go down the glass of PS, this punchiness of flavour mellows and becomes almost creamy. And at this point it’s the blood orange that comes to prominence, demonstrating its robustness for a sour brew.

Undoubtedly, PS is a very nice beer indeed. I’d like it a little sourer, but that’s just personal taste. It delivers where it promises and it’s actually an enjoyable drinking journey from first sip to last sup.

I can think of many occasions where PS would sit well in a beer armoury.  If you’re looking for a way into the sour world, this could well be your door. Go on, you know you want to open it…

MOB review next weekend: PEOPLE OF THE HOP VOL.II by DISRUPTION IS BREWING 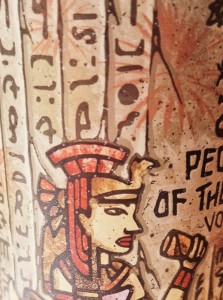