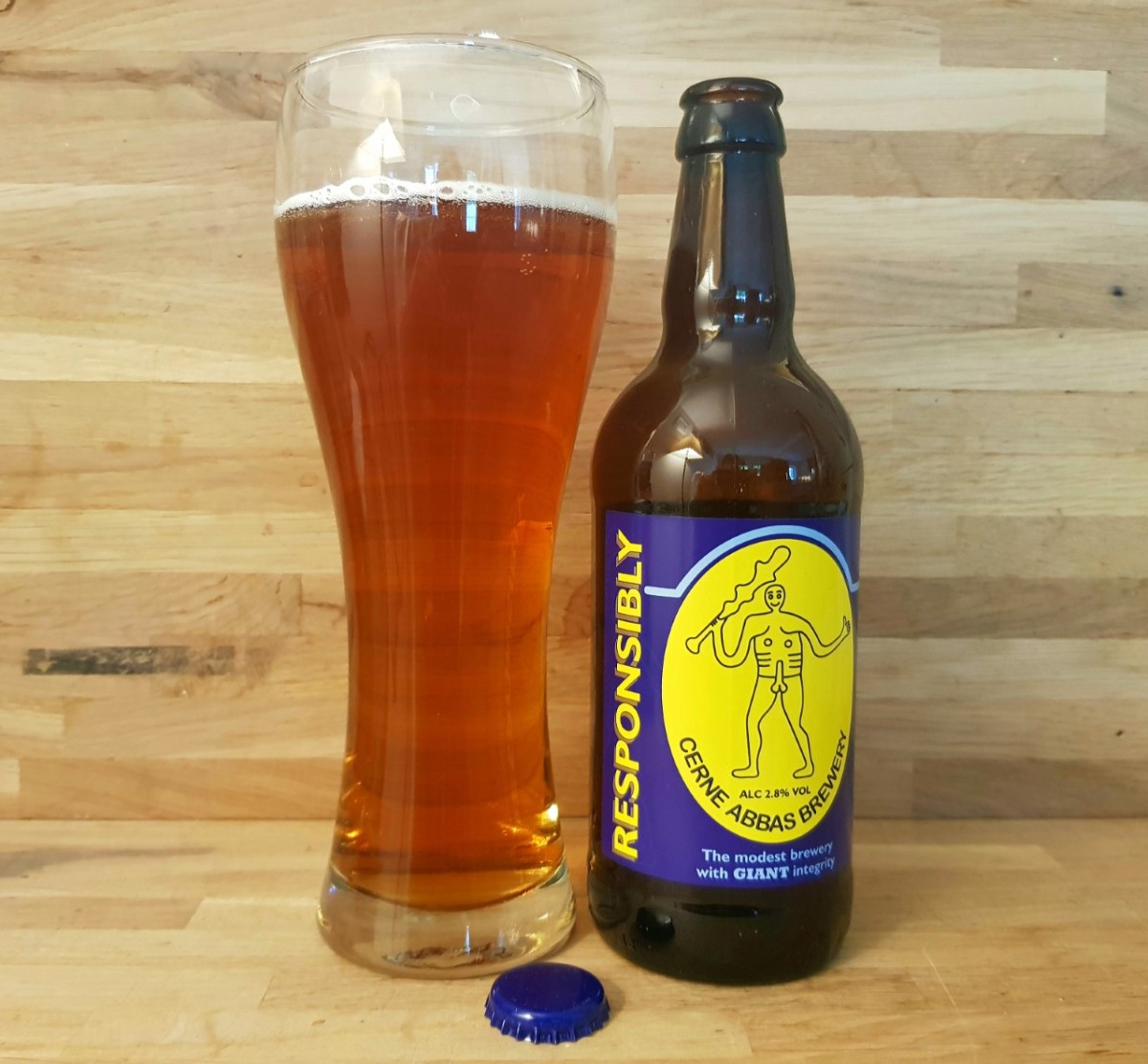 “Have you ever tried this”, he said.

“It’s great. I’m not saying it’s the best thing since sliced bread, but for a low alcohol beer it’s really good”, he stated.

“Would you like me to get you and Sam a bottle each to do a review”, he offered.

So a week or so later Responsibly by Cerne Abbas arrived at the gates of Muse on Booze manor.

Two things instantly struck me. The look of the bottle in the flesh is not great, at all. Not inviting, at all. The design crew have had a shocker I’m sorry to say. And the fact that it’s 2.8% scared me, which is frankly ridiculous as almost six months ago we reviewed Simcoe Small Pale which was 2.9% and utterly fantastic. But scared I was still.

Deep blue lid lifted an aroma of sweet malts made its way toward zee nose… a pleasant surprise but nothing to get you excited really. Once sipped though there was suddenly A LOT to talk about!!

Whilst the glass is to the mouth Responsibly tastes absolutely fine, good in fact. However the second said glass leaves those lips it’s over. By over I don’t mean, it’s terrible or anything, I mean everything stops. Literally stops. The glass leaves your lips and the millisecond it does it is like you hadn’t ever taken a sip at all. This messed with my mind.

So, being a man with a penchant for scientific theory I decided to keep the sips going unbroken. A 10 second glug / chug fest confirmed that whilst ACTUALLY drinking this beer it is perfectly acceptable but the second you’re not it is like it never happened.

DRINK RESPONSIBLY (& KEEP KEEP KEEP DRINKING IT TO MAKE SURE IT TASTES GOOD).

I’m not going to lie, I thought I’d hate Responsibility. I didn’t like the last beer I had from Cerne Abbas, the packaging is terrible and it’s only 2.8% (not that means a beer will be bad). So all the signs were there that a poor beer was in the offing.

Not so. Responsibility it actually surprisingly good. It’s crisp, has a nice upfront flavour and would be great at any time in the year. And despite it’s lightness, it’s not pathetic in it’s body. It’s actually very generous. It has presence and you know you’re drinking a beer, which is exactly what one wants. Of course, once finished the flavour doesn’t stick around for too long, but that’s okay. You can keep on going back for more.

I would describe Responsibly as a table beer. But as mentioned before, it would be good on any table for any occasion.

It just goes to show, even when things are stacked against a beer, they can still deliver. I thoroughly recommend getting out there and getting your hands (and mouth) on one of these. I’m willing to bet you’ll like it. I don’t think you’ll be disappointed because this is one for the masses.